Peter Weissink is a jazz / fusion and pop drummer. He was born in the Netherlands in 1976. Coming of a very musical family, music has been Peter’s greatest passion since he was born. Started out banging on pots and pans and playing the piano at age 6, he also began playing in marching / street bands, where Peter spents a lot of time in developing a good snaredrum technique. 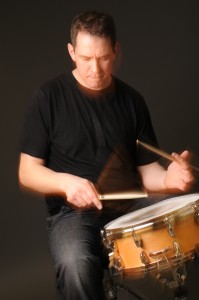 At age 14 he bought his first drumset and from then on his mind was set on playing the drums and playing music. Apart from 3 lessons, he is a self-taught drummer. At the age of 15 he began his musical journey in theatre and musical productions. Later on, Peter started playing also in some heavier pop, rock and blues bands, which led him to playing professionally in well-known wedding bands and orchestras, with styles, ranging from classical to pop & jazz. During this period, he has accompanied both national and international artists, as well as doing studio recordings for various projects.
More recently, Peter has enjoyed taking on more sideman work, thus he is currently playing as a free-lance drummer with various projects and bands.

Peter’s mentality is trying to offer musicality and sensitivity as well as enthusiasm and an open mind to all different kinds of music!

Next to his stage activities, Peter has been recording quite a lot over the last couple of years and he teaches at his own drumschool, which he holds now for 17 years on and off. From October this year he also teaches jazz and pop drums & music at the ArtEZ Conservatory (Pop academy) in Enschede.